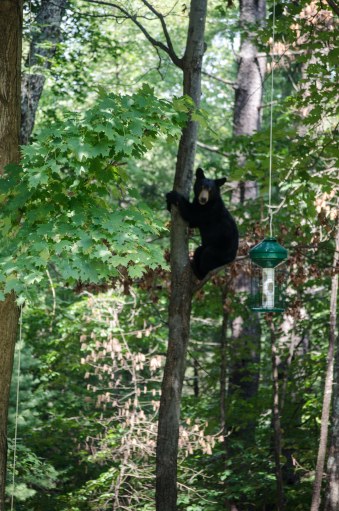 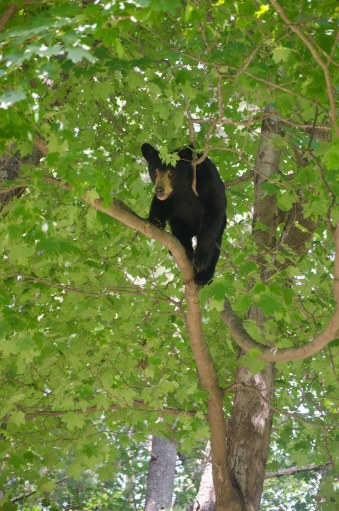 She came by to see the bear in the tree. She lived across the street. It was gone when she did. “It was up there,” he said pointing to a crook in the tree, “trying to get to the bird feeder.” He had strung the feeder almost thirty feet high, far out on a limb. It was engineered with pulleys, and rope, and with a boat cleat at the bottom of the trunk to tie it off, to keep it hoisted out of bears’ reach. “Wow!” she said, when she saw the video clip of the black bear pulling the rope that raised the feeder. “Wow! That’s incredible!” she said when she saw the bear raising and lowering the bird feeder attached to the rope-and-pulley system as the bear tried to solve the bird feeder and rope dilemma, able to realize, eventually, that it couldn’t—which was the solution. “I had never imagined a bear would be able to do this,” the man, her neighbor, had said. He took her to his garden and cut her chard. He cut her kale. He cut her collards. She declined tomatoes as she had plenty of small red tomatoes herself.

The gnats had been flying about, and the woman kept trying to whisk them away from her eyes. The man came back from inside his house and handed her a straw hat. “A wide-brimmed straw hat, I’ve discovered, keeps the bugs away,” he said. “Is it the straw?” she asked. He didn’t know. “I don’t know, but if it works, you can borrow it for as long as you like until you get your own.” It had been friendly of the man to send his neighbor, who was a gentle and kind woman, a text message about the sunflower seed-sniffing black bear up in the tree. And it was kind of him himself to give her those vegetables from his garden. He had several straw hats in a stack from a big party. Long ago. Another time. Once he had said it, the man knew how strange it was, and how odd it sounded to himself to have told his neighbor that he was only lending her the hat, not giving it to her. He had two or three more. That would have been perfect.