The old things that were, or which had been. The filthy crow’s feather. A cut open bottle of Clorox used to empty a dinghy. A woman’s sex tired or just worn out of love’s continued indifference. A man’s prick shoved up with a catheter from biking a thousand miles crushing all the little bits, the pathways inside. Places rent out used automobile tires to the poor who will miss payments. Reedy-voiced landlords will squeeze money they don’t earn out of Section 8’s who don’t care anymore. A bumpkin takes a bottle of polish and a hand cloth and scrubs away the patina on the old bronze plaque and paints the cement block on which it stands deep, dark green. Even the Perseids are blotted out by rainfall and clouds for three days. A mid-town technician charges for 16 MB for RAM and puts in 8. 15,000 more Clinton emails are found and are as meaningless as a pile of dirt in front of a tank. The kid in Tiananmen Square got bulldozed. iPhones do give everybody brain cancer. Monsanto seeds do not reproduce. Indians starve. Chemicals are squirted so deep into the ground no one can tell for fifty more years. All the coral reefs spit out their bacteria and die. The bluebirds will not eat. Geese don’t bother to migrate. The mother serves her children frozen pizza, baby carrots, sliced apples every night. Nobody minds. Two blond, pony-tailed women in Greenwich wearing fluorescent skin-tight leggings jog in different directions on North Street. Their husbands work on Wall Street and the chimney smoke in the mansions they live in designed by Bob Stern protégés can be smelled by the next door neighbors who live in similar edifices on either side and straight across the street. 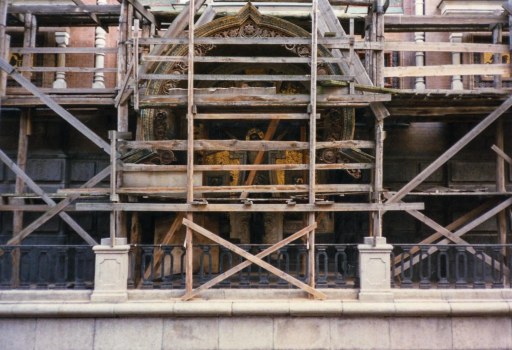 It had been millennia, some said, since there was a blessing worth a shaker of salt. So much had gone by already, what news of yesterday were it not to have been repeated again today in some other, newer vessel. Having watched by the while upon the outposts of the swamp, I kept my steadfast sights on a future that I knew. Where St. Petersburg would once be built. Where the Uffizi would one day be. Where phalanxes of soldiers would march. Where Cato proclaimed again and again his injunction against poor Carthage. I had heard it every time. Where Dresden would be bombed, around 135,000 dead or so (and a half a page in moldered history books). Where Little Boy and Fat Man were and had been. What were Nevada and what were The Housatonic. I watched John Rolfe take his sacred vows and once Pocahontas she, too, was then dispatched, he was soon taken up with a third wife. All this and more, the villainies of Cabeza de Vaca, and many more just like him, all this I have watched go by like fallen sands blown upon the desert. Ave Maria. Urbi et Orbi. Requiescat in Pace. Shantih. Shantih. Shantih.

He and his wife had been on their way to hear Bob Dylan. He was playing in a baseball field. He’d heard Lou Reed, B.B. King, and even David Byrne, too, before her. And if there was one thing in the world he had wanted, it was to hear Bob Dylan play, if only once in his life. Along the way, along the rolling grassy green backroad hills to get there, there were small strawberry stands or local honey booths, and posted metal traffic signs along the narrow paved roadside warning motorists to look out for slowly moving Amish wagons. Before getting to Cooperstown, which is known for its Baseball Hall of Fame, there was a gigantic, wooden farm or farmhouse, a country building of some kind, that had been caught in the middle of falling down. There are of course castles in England where from the multitudes of missing stones enough of the walls survive so that the mind recreates them instantly. The imagination’s masonry does it practically without thinking, building up together all the ‘negative’ spaces with the ‘positive’ ones—the sunlit gaps of light with the impenetrable rock solids—to remake these great, regal citadels of yore. They are truly magnificent, and I have dreamt of standing before them one day myself.

But America is a land of barns and fallen wooden things, and wooden things fall apart in different ways than stone ones. Time pulls them down little by little. They don’t get knocked, not by elves exactly. And along the way, they take on new shapes of completely new structures which only remind us of the old and original ones, but don’t quite harken exactly back to them the way true castles do in the moors. Back in 2006, when Bob Dylan was in the hey-day of his Never Ending Tour, it was already over forty years after upsetting the world at Newport by plugging in his electric guitar in ‘65. After almost a decade after that concert in Doubleday Field, after that couple’s marriage had been long shot, the message for them once traveling together still remains the same: things they are always a-changin’, the only thing permanent is impermanence, and for all things that come into being there is decay. As for the show . . . the one put on by music’s august and craggy elder statesman that night in a black cowboy hat had been rockin’ great. 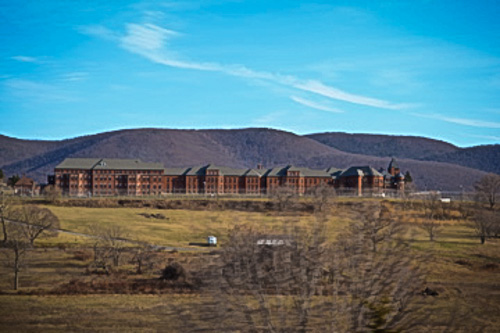 There are so many things I have done here, am guilty of here, I don’t know where to end. For sure, the dozens of times I have passed this edifice at the slumped mountains’ feet, I have wondered about who would be watching me if I pulled over to the shoulder of the highway, and walked onto the grass, having climbed over the rolled razor-wire fence. But that could be, or is, beside the point. I could have cranked the attributes of this photo much more, made a much cleaner ‘shot’ of it. I could have tweaked the highlights, contrast, details, saturation, vibrance, and vignetting, and so forth (much more and with much more finesse) very easily and made it into some sort of horribly wrong pastiche of unintended irony in very poor taste. This I have certainly done while shaving my beard off my face several times already in my life, passing through the usual cast of characters from Vladimir Lenin to Frank Zappa, as these shavings rituals go. But from what I have learned from men I spoken with who’ve served time in my life, most of the men behind bars, they got there for having done some pretty stupid stuff, mostly out of ignorance and desperation that lent itself to that. From what I’ve learned, they’re usually not arch villains, public enemies number one. I’d probably get picked off pretty quickly if I tried to sneak up to it. No matter which way you look at it, though, as we speed along the highway in our cars to work and home, fully immersed and involved in our lives, it’s still a pretty weird and unsettling juxtaposition of seeing the lavender beauty of the mountains reaching toward the rich sky blue sky, below which, nestled in the foothills, are hundreds and hundreds of common criminals living in that brick red prison for years and years for their various crimes.

It had been what was called The Old Woman’s Winter. This had been explained to him as a warm spell during wintertime when widows, mostly, would go to the park and, standing, open their winter coats. They would stand, warming themselves, before the winter sun. Confusion, disorder, and the drift of things over time (and times) makes things unclear. It had seemed certain that this custom took place in Hungary. It had seemed certain that this custom took place in Russia. This is the way the architecture of time itself works. It mixes memory and desire. It mixes the blossom and the bole. It mixes what has risen and what is already fallen. (And moreover, Nature, his mother once told him, does not care an iota for the life of Man.)

But, still! Somewhere long ago, he still recalls quite perfectly: “Lichtlein schwimmen auf dem Strome/Kinder singen auf der Brücke.”* And it becomes as though these things, whatever ‘things’ are, like memories, were in stacks of photographs. And that these stacks of photographs themselves were of different sizes and of different finishes. And could be stacked—sorted—accordingly. According to size and finish. But some of them were so close! So many of the pictures were, in fact, identical in form: in shape, in size, in the color of their surface, and in the sheen of that finish. Stacks of different things, different times, different places became—like memories—stacked in the same stack—where they did not belong! But it was not possible anymore to tell exactly where anything did. So, it became impossible, and next to impossible, to distinguish Vienna from Budapest from Moscow anymore, while these cities were of course forever altogether different.

*[Lanterns swimming on the river/Children singing on the bridge].