Most of my colleagues had urged me on. They had had belief in me. Others who knew me intimately had sometimes said, upon parting, “You’re a great person, but I felt I was deceived.” That was a silly thing to have said, since I myself could not have known. The great Titanic sank. Machu Picchu is an empty ruin. The Twin Towers have fallen. Busily builders build, climbers climb, workers work, farmers farm. Canoe. Kayak. Row. A, B, C. Alpha, beta, gamma. Blessed by the great guru, I had become at peace with myself. For a minute if not for a day. My spirit I would cast across the lake as rose petals had blown in the wind. My sparkle is eternal, my shine radiant, my mother home. 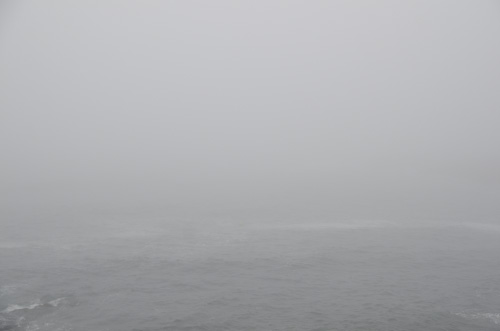 In the most gorgeous places I have been, there are pictures of near nothingness. Everything that is normally seen—the rocks, the boats, the seaweed, the early morning fishing crew a-sea—is wiped out, wiped away. None of these is either dead or really gone of course. The mist just pulls herself, if I can get away with saying that, across the declaring light of day. And the mind, too, will have then another mist pulled across itself. These moments of retreat are not everlasting, anymore than a nod between one fellow passing another fellow along a sidewalk can be. And rather than the usual connotations of blurred understanding and mixed up comprehension that might seem to go along with this ‘mistiness’ or ‘fogginess’, there is an immaculate clarity, a surrounding calmness everywhere, greater than the eye can see. If there is indeed somewhere the sea and sky be visibly welded together without a joint, this earthly peacefulness extends itself far beyond that.

But as for confusion and fearsome uncertainty, that is why Alfred Hitchcock hired Salvador Dalí to design the dream sequences of his films. Terror and the menace of violence has a pellucid, and exacting quality to it commonly known to every human nightmare, which is precisely why a champion maker of those surrealistic visions of heinous genius was employed, rather than filming a set filled with puffs of smoke or steam, or going for the once fashionable hazy, dreamy, soft look of lenses with a gob of grease or gel spread by an index finger around the perimeter of the glass. Creating the ubiquity of peace, restfulness, and safety is altogether another thing. Had Hamlet perhaps perched himself along the Danish shoreline and looked outwards towards the sea’s offing, rather than bearing his princely gaze inland looking so inwardly, he might have seen something akin to the luminous gray horizon surrounding us all and him, rather than a smoky weasel up in the spare clouds or some other rodent or grass-land creature he had caught scrambling there, and had to catch, in his trap of antic fancy.